Recently, I’ve realised that the subject of taxation provides the best litmus test for self – awareness.

In fact, you don’t even need to propose a question to anyone.  On the contrary, people froth at the mouth demanding your full attention and proudly demonstrate how they’ve failed the self-awareness litmus test.

Here it is: can you advocate for massive tax hikes without reliance on a historical factoid? If not, you’ve the litmus test. Those failing this test are not only both ignorant and arrogant, they are dangerous to boot.

Alexandra Ocasio-Cortez proposes a 70% tax on income above $10 million. Bernie Sanders has supported her position.

What reasoning do they use to support this?

“Don’t you know?!? America once had marginal tax rates above 90% and everything was great!”

That’s it. That’s all the proof they need to start pilfering the rich even more. Their supporters dutifully repeat this little point believing to have the ultimate trump card.

Before we get into the numbers, we need to be clear about one thing. These astronomical income tax rates were for so-called “ordinary income” – such as the money you receive from a paycheck. These rates did not apply to income that receives capital gains treatment – such as money from the sale of a stock.

Unsurprisingly, wealthy people have structured their affairs to have income that is taxed as capital gains.

But these blow-hards miss a few

First, there is a difference between the statutory and effective tax rate.

If you glance at the statistics, you’ll discover that the top 1% of US households paid an average tax rate of 42% during the 1950s. In 2014, they paid a 36.4% tax rate. But these actually includes all taxes levied by federal, state, and local governments including income, payroll, corporate, excise, property, and estate taxes.

These figures do not represent the effective rates for income tax – which is after all, the very subject of debate.

Disaggregating the data reveals that the top 1 percent of tax payers had an effective tax rate of just 16.9% on income during the 1950s… including federal, state, and local taxes. Again, this figure does not include income subject to capital gains.

Stated differently, the federal statutory tax rate in the 1950s was over 90% but the effective tax rate for the top 1 percent was less than 17%.

Another way to measure the true impact of the high rates is to consider the amount of income tax receipts as a portion of GDP. 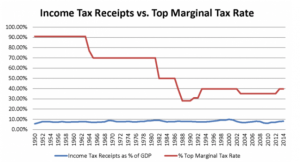 Funny that the tax zealots never mention any of this.

What could explain the disparity between statutory tax rates, the effective tax rates, and the low tax receipts many decades ago?

In the 1950s, every tax return was inspected by hand. There simply wasn’t the manpower to catch fraudulent returns let alone track down non-filers.

Today, the IRS uses a supercomputer as a first line of defense against illegal tax fraud and evasion.

But there have been countless changes in the tax code.

Zealots insisting that 70%+ income tax rates would work based on historical examples use data across three distinct versions of the tax code.

The tax code was overhauled in 1939, 1954, and 1986. During this time the alternative minimum tax has been introduced and modified extensively. There have been changes too numerous to count regarding exclusions, exemptions, and deductions.

These changes in combination with enhanced enforcement make direct comparisons from today to the 1950s pretty much useless. Imposing a 70%+ rate under today’s tax code would be venturing into unchartered territory – the likely result being a massive collapse in economic productivity and eventual decline in tax receipts.

We’ll save the discussion regarding the economics of taxation for another day.

The tax zealots would claim I’m just being pedantic.

But they’re just being idiotic.

The tax code is just under 3,000 pages. The accompanying Treasury Regulations, the government’s official interpretation of the tax code, are probably five or six times longer than the code itself and are complex to the point of absurdity.

For example, the Treasury Regulations spend more than 500 pages explaining the difference between debt and equity. Trust me, it doesn’t read like a Harry Potter novel.

CCH has a 70,000+ page publication called Standard Federal Tax Reporter that provides a bare-bones explanation of the US tax system. Its purpose being to provide tax professionals with a jumping off point for their research… and its 70,000+ pages.

Why? What could explain this?

The code and regulation are intentionally vague and confusing. They contain inconsistencies and contradictions. As a result, a convoluted legal system arose to determine the proper outcome for a taxpayer. So-called “primary authorities” include:

Did you catch that above? The US Tax Court?

Yes, the US tax system is so complex that a special court was created to exclusively handle tax cases.

The average person has never heard of the US Tax Court. They wouldn’t recognize the tax code if someone dropped it on their head. Yet, millions believe to have a firm grip on the US tax system and policy because they’re aware that statutory tax rates once exceeded 90%.

Do these lunatics believe that tax professionals are the most forgetful and absent-minded people on earth?

Do they believe that the code, regulations, and entire tax system were all established to constantly remind tax professionals to simply add up somebody’s income and apply the given rate?

Or, could things be a bit more complicated?

Look, it’s fun to poke fun at these people. But don’t waste your time with them believing that these facts would actually change their opinions. They are “true believers.” Taxation is their religion.

Reporting Foreign Income and Assets – What U.S. Citizens and Residents Need to Know

Reporting Foreign Income and Assets – What U.S. Citizens and Residents Need to Know