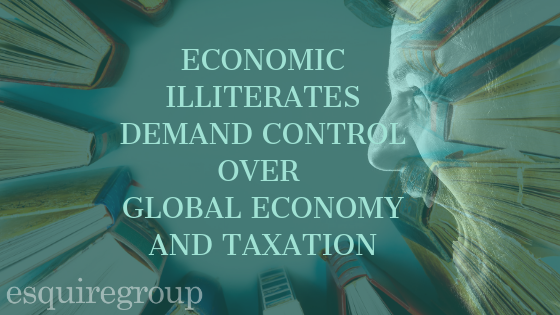 People get into impassioned arguments about all sorts of things – sports, music, movies. But it’s not such a big deal to be wrong about matters like these – taxation.

The same cannot be said for economics.

The Tax Justice Network demands control over the global economy to distribute wealth and resources according to their own desires. Yes, they genuinely believe that billions of people should be subject to their emotional whims.

However, the Tax Justice Network fails basic economics. Their demands bring to mind a quote from the prolific economist

it is no crime to be ignorant of economics, which is, after all, a specialized discipline and one that most people consider to be a ‘dismal science.’ But it is totally irresponsible to have a loud and vociferous opinion on economic subjects while remaining in this state of ignorance.

If only the folks at the Tax Justice Network knew their own deficiencies. The positions they hold are economically unsound and contradictory.

A basic principle of economics is that people must use scarce resources towards a certain goal. Someone cannot simultaneously swim in the ocean, ride a horse, and go to the movie theater. They must pick between these options.

(a)ll action involves the employment of scarce means to attain the most valued ends. Man has the choice of using the scarce means for various alternative ends, and the ends that he chooses are the ones he values most highly. The less urgent wants are those that remain unsatisfied. Actors can be interpreted as ranking their ends along a scale of values, or scale of preferences.

…when someone considers himself worse off, and fewer of his ends are being attained, his satisfaction, happiness, welfare, etc. have decreased… All action is an attempt to exchange a less satisfactory state of affairs for a more satisfactory one

This is an impossibility.

(r)uling out that (the taxpayer’s possession of assets that generate tax liability) was the outcome of another previous act of taxation, and noting that only those assets can be taxed that have not yet been consumed or whose value has not yet been exhausted through acts of consumption (a tax-gatherer does not take away another man’s garbage but rather his still valuable assets!). Three and only three possibilities exist: They come into one’s possession either by one’s having perceived certain nature-given goods as scarce and having actively brought them into one’s possession before anyone else had seen and done so; by having produced them by means of one’s labor out of such previously appropriated goods; or through voluntary, contractual acquisition from a previous appropriator or producer.

Only through these types of activities is one capable of acquiring and increasing valuable – and hence taxable-assets. Acts of original appropriation turn something which no one had previously perceived as a possible source of income into an income-providing asset; acts of production are by neither their very nature aimed at the transformation of a less valuable asset into a more valuable one; and every contractual exchange concerns the exchange and redirection of specific assets from hands of those who value their possessions less to those who value them more.

From this it follows that any form of taxation implies that

a reduction of income a person can expect to receive from original appropriation, from production, or from contracting. Since these activities require the employment of scarce means – at least time and the use of one’s body – which could be used for consumption and/or leisure, the opportunity cost of performing them is raised. The marginal utility of appropriating, producing, and contracting is decreased, and the marginal utility of consumption and leisure is increased.  Accordingly, there will be a tendency to shift out of the former roles and into the latter ones.

Taxation is not just a punishment of consumption without any effect on productive efforts; it is also an assault on production as the only means of providing for the possibly increasing future income and consumption expenditure. By lowering the present value associated with future-directed, value-productive efforts, taxation raises the effective rate of time preference, i.e., the rate of originary interest and, accordingly, leads to a shortening of the period of production and provision and so exerts an inexorable influence of pushing mankind into the direction of an existence of living from hand to mouth.

Believe it or not, the Tax Justice Network agrees… at least when convenient.

Alex Cobham, Executive Director of the Tax Justice Network, argues that taxing tobacco reduces its use.

In this instance, Mr. Cobham is correct. By raising the price of tobacco, alternatives become increasingly appealing. As people opt for alternatives, the overall consumption of tobacco falls.

But how is the same not true for wealth creation?

Labor and capital investment are necessary to the production of wealth.

How does taxation of income and capital investment not reduce the production of wealth but actually increase it?

There is no logical explanation.

Raising the opportunity cost of something will only encourage people to seek alternatives. The Tax Justice Network does not get to pick and choose when economics applies to their worldview.

Taxation reduces the marginal utility of wealth production thus making the alternatives of leisure and consumption more attractive. As a result, less wealth is produced. Simple as that.

I have no doubt that Mr. Cobham and the Tax Justice Network have a cache of studies they believe “prove” that taxing income and capital investment somehow increases wealth.

They prove nothing of the sort.

(e)xperience cannot beat logic, and interpretations of observational evidence which are not in line with the laws of logical reasoning are no refutation of these but the sign of a muddled mind (or would one accept someone’s observational report that he had seen a bird that was red and non-red all over at the same time as refutation of the law of contradiction rather than the pronouncement of an idiot?)

Any report that alleges to show how taxation increases wealth violates logic and basic economic reasoning. As a result, it is without merit.

But don’t hold your breath waiting for the Cobham and the Tax Justice Network to change their position. Taxation is their religion… economics be damned.