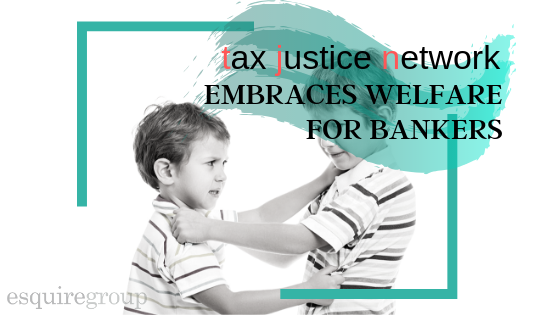 I’ve long suspected that people start with the conclusion they desire and work their way backwards to find justifications. But I’ve never seen such a bold example of it.

If you’ve been relatively successful in life, then you should probably become familiar with the Tax Justice Network (TJN). Sooner or later, they’ll target your wealth.

The TJN is comprised of crybabies that have dedicated their lives taking wealth from others rather than creating it on their own. They demand absolute control over the global economy to centrally plan the distribution of wealth.

For those unfamiliar, this school of economic thought grew out of a simple accounting principle. In short, MMT states that sovereign nations that are in control of their own currency cannot go bankrupt because they can always print enough money to cover its debts.

Yes, that’s pretty much all there is to it. You’d think that the example of Zimbabwe would be enough to demolish MMT but sadly not. MMT is rapidly gaining support.

We don’t need to get lost in the weeds about economics. But if you’d like to learn more about MMT, then I’d suggest the work of economists Robert Murphy and Tom woods (see here, here, here, and here.)

The TJN offers its support for MMT not because they find it to be economically sound. They’re hardly interested in the actual economics. Rather, the TJN jumps on the MMT bandwagon simply because it is compatible with the TJN’s position on taxation – which is, increase taxation everywhere and always.

The TJN will attack wealth by any means necessary. They’ll team up with anybody that provides superficially plausible justification for their demands about taxation.

But here is the kicker. The new money printed under an MMT scheme does not enter the economy uniformly. Regular people do not get checks from the central bank.

The big banks that have direct access to central banks get the new cash first and then spread it through the economy. They get to borrow money from the central bank’s “discount window” at extremely low rates and then lend it at higher rates on the market.

Central banks print money from thin air and buy assets from banks and financial institutions like in response to the 2008 economic crisis – trust me, they don’t negotiate on the price. Central banks pay significantly more for assets than they would fetch on the open market.

Elite bankers and financiers get to spend their billions in profits before prices have adjusted to the influx of new cash in the economy. Yep, bankers get risk-free profits and effectively get discounted prices when spending them.

MMT is welfare for bankers. Evidently, that’s acceptable to the TJN.

But credit where it is due, the TJN isn’t even trying to hide or disguise its demands behind some intricate or long-winded economic theory.