US Tax Law Craziness: How the Government Screws You

Home > Info Stream > US Tax Law Craziness: How the Government Screws You 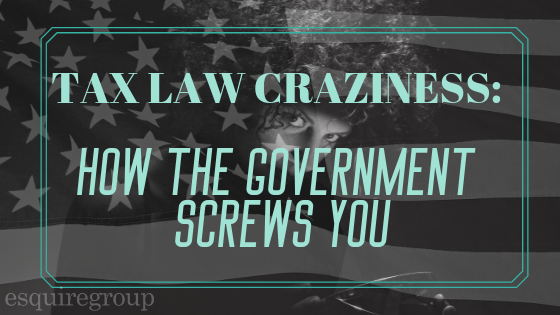 Paying taxes sucks… but you likely don’t know just how devious the government is when it comes to separating you from your money.

US courts apply varying levels of scrutiny to government action, weighing its needs against public interest and Constitutional rights. Freedom of speech is typically afforded “strict scrutiny” – the highest possible level of scrutiny. But exceptions are made for taxation which receives only “rational basis review” – the lowest form of review.

“Congress shall make no law… abridging the freedom of speech.”

Yet, taxpayers can be sentenced to a year in prison for failing to file a tax return. Taxpayers are, in essence, compelled to engage in speech and divulge their financial affairs in great detail.

As John Hasnas, Georgetown law professor, explains, the First Amendment is a clear and unequivocal prohibition, but Courts have interpreted “shall make no” to mean “may make some.” Thus, courts have elected to interpret the most-simple words in the English language to mean their opposite. As a result, every word in every piece of legislation is open for debate. Without exception, everything is interpreted in the government’s favor.

In April 1976, a taxpayer sold his house and, under the rules then in effect, legally paid taxes on half of the recognized gain on the sale. In October of the same year, the Tax Reform Act of 1976 was passed which increased the amount due on such sales. The Supreme Court sided with the IRS forcing the taxpayer to pay the increased amount under the rules that did not exist at the time of the sale (United States v. Darusmont, 449 U.S. 292 (1981)).

In the early 1980s, US tax law encouraged employees to sell stock in their employer’s company to its employee stock option plan (ESOP). Acting on this incentive, a taxpayer sold stock to an ESOP at a loss. In 1986, Congress repealed the relevant laws and the IRS applied the new law retroactively. The Supreme Court unanimously upheld the imposition of the retroactive tax, costing the taxpayer more than $600,000 (U.S. v. Carlton 512 U.S. 26 (1994)).

Quite literally, you can be taxed under laws that did not exist at the time you engaged in a taxable event. Evidently, tax legislation serves as a time-machine.

But you don’t need to have actually engaged in a transaction to be taxed.

The US tax law is littered with “deemed distribution” clauses allowing the IRS to invent fictitious transactions and tax people as though they actually occurred.

Also, the IRS relies on its formal policy known as “nonacquiescence” to attack taxpayers. Suppose that a taxpayer believes he owes X and the IRS claims he owes Y. A lawsuit follows and the court sides with the taxpayer. Nonacquiscence allows the IRS to continue to demand Y from similarly situated taxpayers despite the court’s ruling. This forces taxpayers to sue the IRS to receive favorable treatment. However, success in the US court system is never a guarantee.

These truths raise an obvious question: is there any tactic that’s a step too far for the government?

I cannot think of one.