Why Corporate Debt is So High

Home > Info Stream > Why Corporate Debt is So High 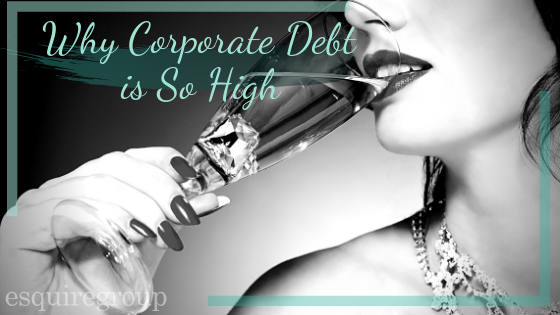 There’s about $9 trillion in corporate debt. Many financial analysists warn of a “corporate debt bubble” and that it’s a harbinger of economic recession and even depression.

A quick google search of “corporate debt” will give you thousands of results. Surprisingly, most of these articles fail to address a key issue: corporate debt is frequently just a tax play.

Under the US tax code, borrowed money is not considered income. Thus, no taxes are owed when receiving a loan.

Moreover, interest payments can be tax deductible – subject to certain limitations: interest payments on corporate debt for companies with annual average gross receipts of $25 million or more are limited to 30% of the company’s EBITDA (earnings before interest, taxes, depreciation, and amortization).

I suspect that the tax code is actually the number one reason for corporate debt.

Here are a few examples of how corporate debt is used to avoid taxes.

Before the tax reform in 2017, US companies held about $2.6 trillion in profits in so-called “deferral.” Prior to then, profits were not taxed until they were “repatriated” – that is, returned to the US parent company. US companies could “defer” paying taxes on these profits indefinitely by keeping them on the books of their foreign subsidiaries.

Viola – US parent companies would then have access to cash without triggering any tax liability.

But this scheme is no longer viable.

Under the new GILTI system, foreign income is subject to a minimum tax if it is not taxed at least 13.125% abroad. However, I suspect much of the debt that was created under the old tax regime is still outstanding and is thereby still contributing to the total corporate debt figures.

US parent companies have headquarters, offices, R&D and manufacturing facilities located on US soil. These assets frequently appreciate in value. Selling them off to access their appreciation would trigger tax liability. Sometimes companies will first enter a Section 1031 exchange for more valuable property, but most will borrow against these assets rather than incurring a tax bill.

This gives them access to cash without causing a taxable event and without losing ownership of their assets.

Many US companies own stock in other companies. Again, they can access cash and avoid a taxable event by borrowing against their stock rather than selling it.

Practically all of corporate debt incurred for tax reasons has little risk of default. US parent companies would lose the tax benefits by not repaying the loans. US companies would risk forfeiting assets like real estate and stocks by failing to repay loans on such assets.

It would be interesting to learn how much corporate debt incurred for tax reasons:

However, these would be impossible to track.

Since the bursting of the housing bubble in late 2007, foreigners have been snatching up US property at considerable pace and have contributed to the

How to Avoid Taxes and Risks When Buying Real Estate

Each year, millions of people purchase real estate in various parts of the world. Most title their properties in their own name and will face

It’s impossible to talk to a tax-zealot without hearing something like, “we could afford X, Y, Z if we stopped the biggest corporations.” Invariably, this